Last year me and Johannes Koski published our study on a series of fascinating and confusing events.

In 2017, the artist trio Shia LaBeouf, Nastja Säde Rönkkö and Luke Turner created the installation #ALONETOGETHER. The three artists spent a month in separate cabins somewhere in Lapland, isolated from everything else. In the modern art museum Kiasma, there was a small cabin people could go into. There were cameras in the cabin that relayed everything that happened back to the artists. The artists were also filmed by cameras, but they could only communicate with the audience by typing, with the text slowly appearing underneath their images. They could not see or hear each other.

Because the installation brought the audience into direct contact with them, some formed a strong connection with the artists and the other members of the audience. A small community grew around the artwork. People got to know each other, discussed the big questions in life and danced together to amuse themselves and the artists.

But not everyone agreed with the artists work and what they stood for. There were guards posted next to the artwork because someone tried to sneak into the cabin in a frog mask to harass the artists. Why a frog mask? Because the guy was inspired by 4chan and Pepe the Frog. He wanted to troll the artists because of their earlier art.

At the beginning of 2017, LaBeouf, Rönkkö and Turner collaborated on a different project, He Will Not Divide Us. It was a statement against the inauguration of Trump as the 45th US president. The artists invited people to state the name of the artwork into a camera on a live-stream. It didn’t take long for Trump-supporters and trolls to sabotage the stream. He Will Not Divide Us had a lot of problems and had to be relocated multiple times, but it did manage to get LaBeouf, Rönkkö and Turner the attention of the pro-Trump crowd, especially the ones that spend a lot of their time online.

When they traveled to Finland for #ALONETOGETHER, they were exploring different themes with their work: isolation, technology, communication, closeness. But not everyone was willing to move on. Finland is far away from the US, but over the internet, the distances are not that hard to cross. So when they isolated themselves and asked people to form connections with them, people from 4chan complied.

Frog masks, MAGA hats and references to things that were supposed to make LaBeouf angry (as a Hollywood star, he was the main target) became common inside the cabin. Ironically, masks made some of the trolls easier to recognise: security could stop everyone wearing frog masks, when those without masks could just walk inside. 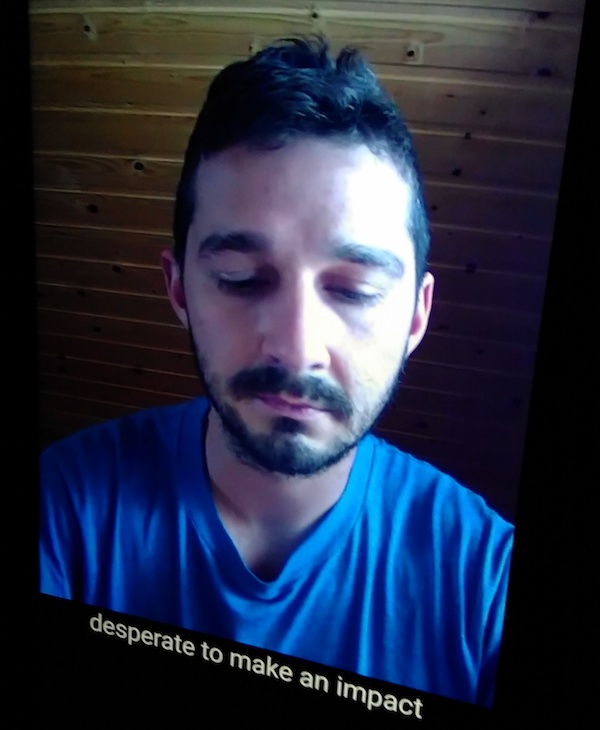 At least some of this was organised on 4chan and Ylilauta, the Finnish equivalent to 4chan, but probably not all of it. Kids would wave their phones at the camera recording all the events, with Pepe smiling on the screen. “For the memes,” as they say. You could tell that what was happening was getting to the artists. When I asked them about the events, LaBeouf thought that I was there to troll them and became irritated.

The difference between playfulness, trolling and politics becomes blurred, when the targets are trolled because of their politics. For the trolls, it was always possible to withdraw behind the alibi of playfulness, even as they wore their MAGA hat. For the artists, it was not as easy: they wanted to reach an audience, but they didn’t get to choose that audience. However, as a gallery, Kiasma set limits on how to engage with art: a guard posted next to the cabin made sure that some ways of engaging were accepted, while others were not.

Want to read more about this in Finnish? Take a look at our article: