Surveillance capitalism is the new default way of doing business on the internet. Even businesses that don’t need to collect data do so because it’s so easy.

Surveillance capitalism doesn’t require you to consume, it just requires you to exist within digital networks. You are more valuable as a source of data than as a potential customer. Therefore, it makes perfect sense for Google and Facebook to give away all their products. They don’t require you to pay anything in order to grow rich – together they make more money on online advertising than everyone else combined.

The idea of surveillance capitalism was originally popularized by Shoshana Zuboff. She theorized that we have entered a new phase in how capitalism works. As the Economist put it “the world’s most valuable resource is no longer oil, but data”. Ford and General Motors shaped society with mass-production and managerial capitalism. Now Google and Facebook monetize everything we do when connected to the internet, which is to say almost everything.

Because this is the new normal, it’s easy for all companies to travel the path of least resistance. You are not going to read the Terms of Use anyway, and even if you did, you wouldn’t think it’s exceptional that they collect all kinds of data on you, whether it is necessary for running the service or not.

In order to to make the idea clearer, I’m going to take a closer look at one example, ResQ. They list restaurants that have meals made, but not sold, offering them to you for a reduced price. You can pick meals from a map listing all the restaurants and can filter the results if you prefer something like vegan food. In general, I like ResQ: they provide a service that is useful to me, useful to the participating restaurants and reduces food waste. They are also a good example how easy it’s to default to how surveillance capitalism works.

In order to be practically useful, they have to collect some information. They have to know if you reserved a meal and whether you paid for it. This is done easily, and they list three different payment options. Using any of these also connect the payments to your person, making all customers identifiable. They also need a practical way of listing the offers, and they have opted for a map. The service doesn’t deliver, so they don’t need your address in order to work.

What kind of information do they actually collect? You have to read the Terms of Use in order to find out. The information is clearly listed, but includes a bit more than your login and payment details. 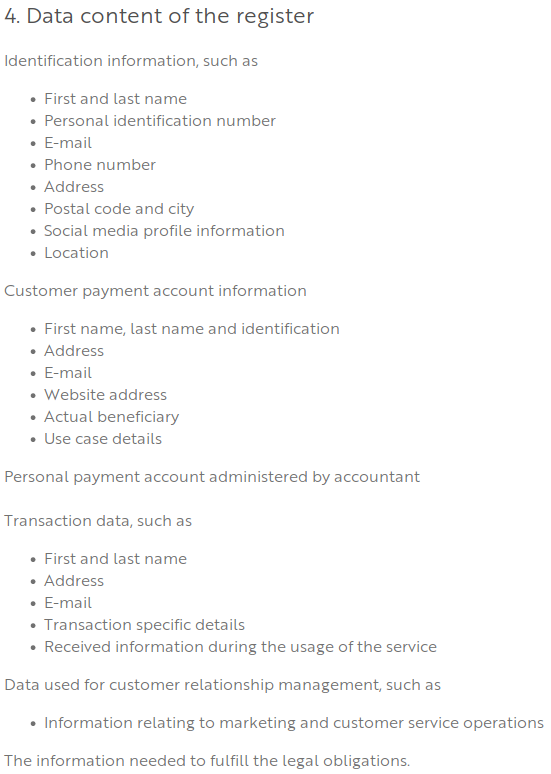 Some of the information collected might be useful – if they want to email you about something, they probably need your email address. What they do with your street address is less clear.

“Social media profile information” is a really vague term, but it is probably a reference to Facebook, since ResQ allows you to login using your Facebook account. Of course, it’s so vague that it could also include anything else they might want to collect about your online presence.

Probably the most personal thing listed is “Location”. The Terms of Use don’t elaborate more on how your location is used, but it’s used at least in showing restaurants close to you when using the app – not really necessary, since the app is already using a map you can move around, but potentially convenient.

If payment information and listing offers is the only practically necessary information for running a service like ResQ, what do they do with the other data? Probably nothing. They do inform in the Terms of Use that it’s possible to opt out of direct marketing by messaging them, implying that they do some kind of direct marketing.

With the amount of information they collect, they could invade your privacy pretty badly, stalking you around the clock by keeping track of the location data they have. Maybe if selling leftovers isn’t lucrative enough, they could find new ways of using that data – after all, it’s the new oil. More likely is that they will never use that data, but they collect it just in case.

Surveillance capitalism is the new default, so people are going to give up their data without a second thought. Companies will collect that data because everyone else is doing it anyway – and it might turn out to be useful in the future. Again, this is not a criticism of ResQ. They provide a useful service and collect some data in the process of providing that service. The data they collect is probably more than they need to run the service, but since that is how you run a business in the age of surveillance capitalism that is what they do.

It will take some years before we see whether trusting companies with that much personal data was a good idea. Of course, by then the data will already be collected and next to impossible to get rid off.

Update: After I wrote this piece, ResQ confirmed to me that they don’t collect or use your address, “social media profile information” is a reference to Facebook and that location data is currently collected only when the app is running (there’s an update on the way to change that). They stated that “updating and changing the Terms of Use in a constantly evolving service is laborious, so in this case they have been consciously written to be slightly more generic” (my translation from Finnish).