The Google memo assumes that computing is naturally suited to men. But is it?

After writing this post I made an updated, interactive version of this text. If you want to dive deeper, take a look at Gendered Computing.

The discussion on the Google Memo has been lively, especially after Google decided to fire the author. There have been many responses to the events, but many still seem confused about whether the contents of the memo were correct. It correctly identifies that our thinking is often rife with bias, and then suggests corrections to what it identifies as the current Google approach to gender diversity. In short, it states that

Differences in distributions of traits between men and women may in part explain why we don’t have 50% representation of women in tech and leadership.

It may be, but if we look at the history of computing, it’s easy to see how these ideas about gendering tech are tied to cultural assumptions about gender.1 The reason why there isn’t a 50% representation of women in tech has a more complex reason than just basic biology.

Before home computing, computers were huge machines needing whole rooms for themselves, like the ENIAC pictured at the beginning of this text. In the early 20th century, computers were often programmed using what were called punch cards, cardboard cards with holes in them.

Because using computers was very slow and required attention to detail, it was seen as a natural fit for women, who were often employed in secretarial positions doing similar tasks. You could do it indoors, so in most places it was seen as an office job. These assumptions weren’t universal though, and in Germany computers were run by men in overalls in settings that looked much more like factories than offices.

ENIAC was more powerful than most machines running punch cards. To make it work, you had to manipulate switches and cables, making the work extremely complex and time-consuming. ENIAC was programmed by six programmers, Kay McNulty, Betty Jennings, Betty Snyder, Marlyn Meltzer, Fran Bilas, and Ruth Lichterman, all women. They were mostly trained in mathematics, but there were very few jobs open to women with that kind of training. The women were chosen to work with ENIAC as “computers,” using the ENIAC to calculate ballistic trajectories. Their contributions didn’t stop there, and especially Jennings and Snyder continued to work as engineers and designers. Snyder later participated in developing the programming languages COBOL and FORTRAN with Grace Hopper. Hopper is also well known for her contributions, having developed the first compiler. 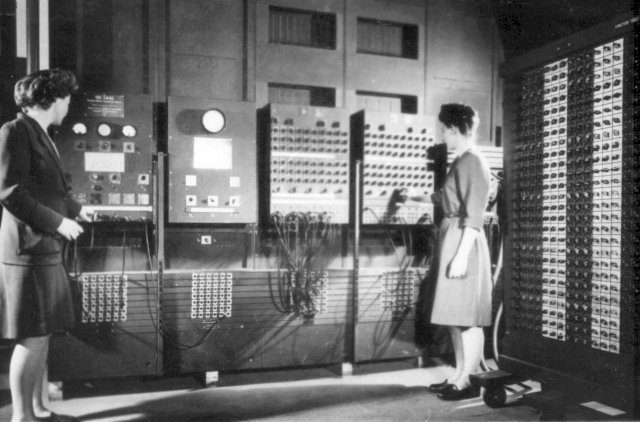 Betty Jennings and Frans Bilas in front of the ENIAC

Starting from the 60’s, women started studying computing in large numbers. For example, in the United States nearly four in ten computing undergraduates were women. There weren’t enough people to work all the jobs in the booming computing industry, so it was easier for women to enter the workforce. “Women are ‘naturals’ at computer programming,” Grace Hopper is quoted as saying in a Cosmopolitan 1967 issue. Programming is “just like planning a dinner.” By late 80’s 38% of US white-collar computing workers were women.

The image of computing started to change during the 80’s. The peak year for US computer science bachelor degrees for women was in 1984, with 37% of degrees going to women. By 2006, only 20% of bachelor degrees were for women. Computing was being gendered more and more masculine by the end of the 1980’s.

There were many reasons for this. One was that as computing jobs become more commonplace and varied, their status slowly rose. Higher status jobs are often coded masculine, even to the extent that wage differences follow these changes in gendering. Another factor was the creation of the idea of the nerd, usually tied to interest in technology – and clearly gendered male. The archetype shifted from the female secretary to the male nerd, hiding in the basement with computing equipment.

As home computers became available, it was important for advertisers to make them attractive. They tried to make home computing respectable, emphasizing things like calculating taxes. As was typical in the advertising imagery of the time, they offered conservative images of nuclear families with men using computers and women doing housework on the background, like in the 1977 ad for Apple II. In these ads, computing was clearly the realm of men.

The Google memo assumes that cultural things like computing and gender are stable and unchanging, but a quick look at the recent history shows how fluid they really are. The complete picture is much more complex than detailed here, but it’s clear that just assuming biological differences isn’t going to explain the gender gap in computing, which got much worse after the 60’s. Instead of looking for biological differences, it would be more useful to understand how gendering computing has been a historical process, with clear differences between decades.