The second day of Adult Play seminar discussed sexual play, parents and mature players and understanding some basic features of games through psychophysiology and Goffmanian analysis.

The day kicked off with a keynote from Ashley Brown, where she discussed the connections between play, playfulness and sex, arguing for example that good sex is playful.

Keynote by Ashley Brown: play and sex are often interchangeable. Seems to check out for Huizinga #adultplay2015

“(Good) sex is playful” says @GamerGrrl in her keynote at #adultplay2015

The keynote was followed by the first session on sexual play. It was started by Davide A. Fiandra, who discussed the game Luxuria Superbia. He noted how game was usually presented in games as a reward, not as part of the gameplay. Luxuria Superbia is different, focusing not on how sex looks (pornography or pornographic games) but on how the dynamic feels.

Now @Omiminpo is talking about Luxury Superbia - wish I had brought my iPad with me to try this fascinating-sounding game! #adultplay2015

Next up is @T0MM7 discussing gendered technologies of the body & warning us of “HBO-style” nudity. (will there be dragons?) #adultplay2015

The session was concluded by J. Tuomas Harviainen presenting for himself and Katherine Frank on group sex as play. The presentation detailed very interesting rules negotiations that are necessary for the kind of social activity that group sex is and argued that ‘procedural literacy’ was a necessary skill for participants.

“There will be no pictures, but if you want to look at some, here are some terms you can Google” - paper on Group Sex as Play #adultplay2015

Group sex playful but not a game - but is it a league sport? Terminology is about “scoring” and “taking one for the team” #adultplay2015

He interviewed 14 parents, showing that they knew about age restrictions, but sometimes neglected them when they clashed with their own opinions. Parents weren’t overtly concerned about violence, being more worried about the people online and physiological problems games might cause (lack of sleep, bad posture).

All interviewed parents set time restrictions on kids’ game play; none of them had these when THEY were kids. @janne_plays at #adultplay2015

Content is not a threat but people are? – parent opinions on (digital) game play. #adultplay2015

The next paper was from J. Matias Kivikangas and Simo Järvelä about the neural basis of play. It presented an emotional theoretic model for the modules that might be responsible for playful behavior, showing that it is connected to a tendency to explore the world, whether physically or more abstractly. 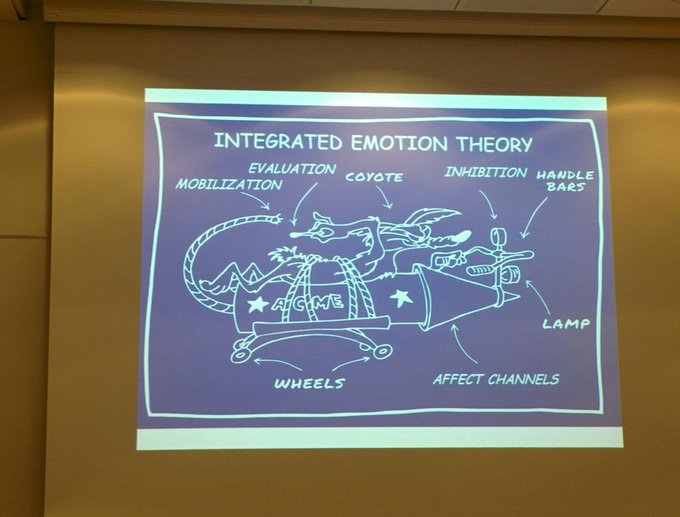 The last paper in the session was by Sebastian Deterding. He discussed the conditions in which adults can play or be playful without shame for doing so. For example, he discussed legitimizations adults use to turn play into something responsible, like discussing it in term of collecting (not toys; collector’s items), strategic training or training. It didn’t go unnoticed how academic researchers need to legitimize play in order to research it.

Wiggle break before @dingstweets presents. Was the jumping around a form of Adult Play? #adultplay2015

As adults, we’re expected to be sane, benign and competent. Embarrassment: we produce an event that disproves one of these. #AdultPlay2015

The last session on parenthood and mature players was started by Melissa Rogerson presenting for herself and Martin Gibbs. She focused on serious leisure: board gamers who identified with the hobby and struggled to find strategies in incorporating it into their lives while kids took a significant amount of their time.

Now @Melissainau presenting research on parents’ practices and attitudes to board games. #adultplay2015

She was followed by Mikko Meriläinen who explored what successful game education would be and how it could be given to parents. A lot of the problems seemed to be addressed by the parents gaming literacy, but in some cases it seemed to lead to overconfidence: being an avid gamer does not make somebody automatically a good game educator.

The last session was concluded by Gabrielle Lavenir, presenting her interesting work with a workshop for older Parisian women playing games. This seemed to work as a way of domesticating videogames, while presenting interesting clashes between what is expected of a player and how those women actually performed the role.

Don’t make assumptions about why older adults are playing - it doesn’t have to be “for therapy”, maybe it’s just fun. #AdultPlay2015

So after all the “reasons” & legitimisation of adult play, gamers can learn from older Parisian women who don’t need excuses. #adultplay2015

There seemed to be a common thread running through the discussions over the two days, spun there mostly by Jaakko Stenros and Sebastian Deterding: Goffmanian sociology.

While it is hardly an universal common paradigm for game studies, at least in this seminar it seemed a very persistent one.

Hooray to all. #adultplay2015 is done

The papers are not publicly available, so if any of them made you interested, I suggest you contact the author and ask them for a copy.